Spring is a busy time for EV owners with Earth Day activities and all the general coming-out-of-the-shell energy.  No exception here; on Sunday I attended the Go Green Expo at the Greater Philadelphia Expo Center to hear a panel on alternative transportation featuring Oliver Perry, the president of the EEVC, Isaiah Thompson of the Philadelphia City Paper and Seth Leitman, co-author of Build Your Own Electric Vehicle.


I announced the May 1 EV-ent in Macungie there and when I mentioned that we were going to be giving away a copy of his book, Seth immediately contributed a signed copy!  So hey -- this Green Living Guy is great!  Currently a writer and radio/video blogger on a variety of environmental issues, Seth has a long history with EV's, having worked directly on experimental implementation of both alternative-fueled buses and electric commuter cars in New York City.
In additon to co-authoring the well-respected text Build Your Own Electric Vehicle, Seth helped to produce Build Your Own Electric Motorcycle (which he also donated for the May 1 EV-ent!) as well as many other volumes in the Green Guru series.  Check out his website at http://www.greenlivingguy.com

So if you can join us in Macungie on May 1 -- you'll have the chance to enter a drawing for a signed copy of either of the above two books!  Not to mention the chance to pick the considerable brains assembled on our panel of owner-operators of converted EV's.  This is an invaluable learning opportunity for anyone who's curious about the process, and always a fun time for the panel paricipants as well.  These guys (and they are mostly guys, but me too) love to talk about EV's. 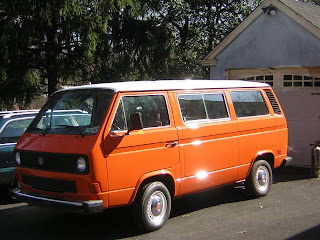 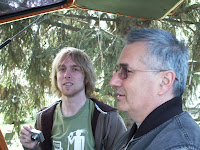 Meanwhile, on Saturday I went down to visit the e-Van -- looking resplendent, don't you think? -- which has been under Bill's care.  Bill and I were being interviewed by Kutztown University student David Dunn, a long-time EV enthusiast who has chosen to document our work for a project on Alternative Fuels for Commuters he is doing for his environmental conservation class.  David loved getting to check out -- and ride around in! -- the e-Van and I was happy to see how much progress has been made!  Bill has been hard at work and our goal is to have her complete by the May 1 EV-ent. 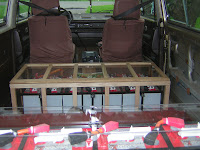 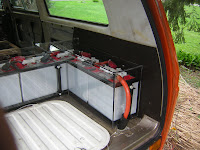 The front battery enclosures in their oak-and-lexan casings are all done (left) and the rear enclosures are well underway (below).

We ordered -- and had delivered in record time -- some very cool-looking marine bilge blowers to vent out the hydrogen gas that can accumulate during charging of the lead-acid batteries; the computer fans we used on the initial conversion weren't really strong enough. Getting them installed is on the agenda this week.  Too bad they won't be especially visible.
Did I say April was busy?  With the Macungie EV-ent on May 1 and the 21st Century Automotive Challenge in State College late in the month it is looking like May's gonna be chock-full!  I'll keep you posted!