"Your Van's in Paint Jail!" 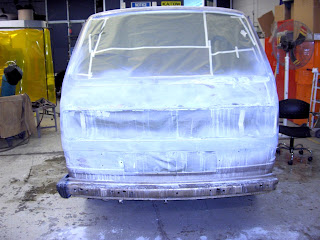 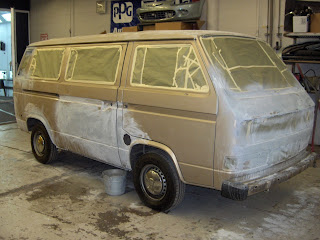 That's what Ken Barbour said to me at the Energy Fest back in September when I explained why the e-Van wasn't there. I said, "What?! You mean this is a recognized phenomenon?!" and he confirmed it. According to Ken, when you have a project car and somebody else is painting it for you -- especially if they're doing it as a favor, meaning it is a second priority behind actual paid jobs -- you always think it's going to take a week or two at the most. And it always turns out to take months and months. I was ecstatically relieved to know I'm not alone with the experience of my vehicle disappearing into Paint Jail! "That's why you always schedule painting in the winter," Ken concluded. Well, now I know. 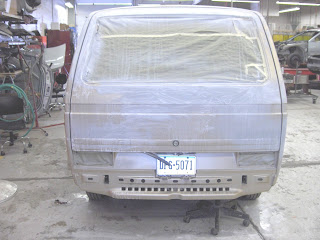 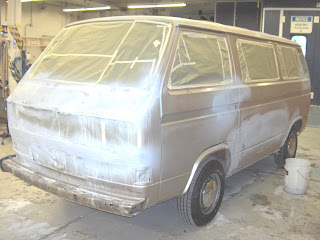 Here are a few shots of the van in bondage! It's fully prepped, taped and bondo'ed and -- at least so I heard last week -- really and truly on the verge of receiving its long-awaited paint job. Larry and Bill have a date to build battery enclosure A on the Saturday before Thanksgiving. And I finally wrote to the state of Pennsylvania asking when they would begin the reimbursement process on the grant monies that subsidized the 2009 EV Conversion Workshop. I submitted a request for reimbursement in July, but it was held up by the state budget impasse for months! The 2009-10 budget was finally signed on October 9; I waited a few more weeks and then dropped my very patient and helpful grant coordinator a tickle. She reported that the Comptroller's office had released the funds on October 22, so I should get my big fat reimbursement check any day now, and be able to pay off the personal loan that allowed us to offer the workshop in the first place.

Meanwhile I have submitted a request to NMTCC for a series of Saturday dates in the spring and am waiting for them to get back to me. This workshop would not be grant-supported; we will either re-convert our Dodge Colt using the existing EV components (meaning we wouldn't have to purchase too many supplies, just cover insurance, shop rental and teacher's salary out of the workshop fees) or do a full conversion for an owner who will pay for the conversion kit themselves. The latter model seems like a very good way to continue offering educational workshops and getting more EV's on the road!

Finally, Bill and Lynn and I are in the final stages of developing the EV curriculum that was funded by the PA Department of Environmental Protection grant. It is due on December 15 to the state, so check back here for the completed offering in a month or so! This curriculum, consisting of a week's worth of hands-on activities based around a benchmounted low-voltage battery and circuit system, will be freely distributed to teachers once it is complete. I'm looking forward to sharing it! Stay tuned!
Posted by jisaacs at 8:37 AM No comments: