I just got this video link today and am hastening to post it -- it's the very last call for EVTV voting for Brandon Hollinger's London Taxi project!  Yes that is a glimpse of our Red Hot Miata EV (for which Brandon did the design and pre-workshop build): our instructor Bill Kirkpatrick is putting it through its paces while I'm filming & giggling.

Scientists Build Battery in a Nanowire: Hybrid Energy Storage Device Is as Small as It Can Possibly Get    (Science Daily)
Japanese researchers can deliver power to your wheels by radio  (Autobloggreeen)

EV's Are Not the Only Answer to Our Transportation Problems
Local Colorado Brewery Transports Kegs via Tricycle  (Treehugger)
Artisan Pickles Delivered by Cargo Bike  (Treehugger)
Inexpensive Truck Aero-Tweak Could Save 1.5 Billion Gallons of Diesel Each Year  (Treehugger)
Slide To The Train  (Popup City)
A Greener Way To Get Into Space: The Bloon (Treehugger)
Solar Roadways Get $750,000 For Bigger Prototype; Maybe It's Not So Crazy After All  (Treehugger)
Hundreds Of Thousands Of Americans Have No Car, No Access To Transit
(Treehugger)

Today I Got To Test-Drive a Nissan Leaf! FINALLY! 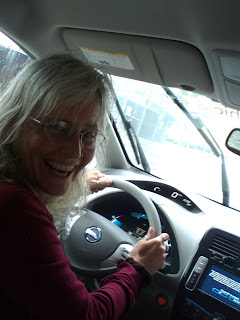 But  first -- I have been delinquent in linking to this excellent write-up of our recently concluded 2011 EV conversion workshop which appeared in the online venue Bucks Local News!  I also have to admit I have been slacking even more than usual so I am way behind on post-workshop mop-up.   While the parts I was responsible for (publishing the final costs of the conversion; making an EVAlbum page for our newly-created Miata EV; and post-workshop publicity beyond the awesome efforts of the PR angels at Bucks Community College) have languished, Saint Bill has been dedicatedly plowing through the mechanical issues that surfaced during the Miata's ICE-to-EV transition.

I paid a visit to our little red-hot LiFe baby this weekend and she runs backwards and forwards, shifts smoothly, brakes silently on her yummy new high-performance brakes, and furthermore is sporting a brand-new alignment.  (Bill says the folks at North Penn Mazda were incredibly helpful in diagnosing and fixing the hard-shift-into-reverse issue.)


Just a few EV tweaks left (including replacing a defective DC-to-DC converter, sigh) and then we will be inspectable and on the road -- we hope in time to establish some real-world kilowatt-crunching and range-tabulating data before we bring the Miata for display at the PA Energy Fest in September!

Okay, now I will tell you all about FINALLY getting to test-drive a Nissan Leaf.

This story really begins on Earth Day, 2010.  On that date Nissan opened up reservations for the Leaf, and we here at Bucks County Renewables ponied up $99 to reserve one.  We knew they would not be appearing exactly soon in PA, but we were quite sincere in our hopes of landing one of the first production electric vehicles available.  It was going to be red.  Sniffle, I really believed it would be here in a year.

Well, over a year has elapsed with little communication from Nissan to us personally as prospective, paid-to-show-we-were-interested buyers.

Then I got even grumpier on behalf of interested buyers everywhere in the confluence of the PA and NY and DC markets when our little ad-hoc group of organizers (led by the fearless Anna) of the EV-ent in Macungie couldn't manage to pry a Leaf out of corporate Nissan for display at our show back at the end of April of this year.  We went right to the top, with emails, phone messages, & two actual conversations with the director of electric vehicle marketing for Nissan USA.

We argued with our usual charm and verve that an established all-EV show in the aforementioned confluence of markets would be a logical place to display the first pure EV on the market that actually functions as a family car (as opposed to the Tesla and the mini-E -- the 2-seaters we had on display in 2010).   Like, please show us you are serious about marketing electric vehicles folks!   We did not ask them for money or test drives anything -- just a Leaf for our EV-ent attenders to ogle.

Admittedly there is a huge grin on my face in the actual photo at the top of this post, captured when we finally got our hands on the wheel of a Leaf earlier today, but here is Anna looking more thoughtful maybe she is reflecting on the months it took us to get behind the wheel of this thing ... 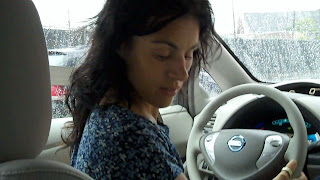 Back in March & April all our persuasive efforts with the very tippy-top electric vehicle marketing person at Nissan North America in the end yielded the only sorta helpful "Well there's a guy in New Jersey who works for us who has a private one, maybe he'll be willing to bring it."  And then it turned out he had a schedule conflict.  So all of us were disappointed and made irl faces like this  :-(  and in my case at least began making ominous and public mutterings about buying a Ford Focus EV instead because in my opinion (and I have many) maybe Nissan was not serious about marketing this car.  From a consumer perspective -- and admittedly I am a notoriously hard-to-please customer, but really dudes -- I am no longer serious about buying a Leaf unless some Nissan rep drives it up to my door and makes me feel like they want to sell it to me and not the other way around.

But!   It's not like I was gonna boycott the opportunity to take a test drive when Nissan FINALLY brought its "drive electric" tour to Philadelphia, so when our fearless leader Anna hipped me to this morning's test drive opportunity of course I signed up right away, along with Phil Jones, who serves with Anna on the board of the Mid-Atlantic Renewable Energy Association and annually coordinates the Transportation Tent at Energy Fest.

This was the third day of a 3-day event.  It was a very wet Sunday morning in Philadelphia and actually there were more people in attendance than this desolate-looking scene indicates: 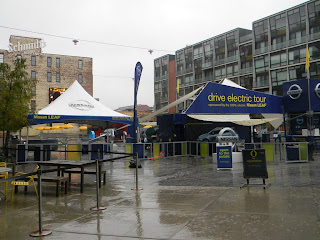 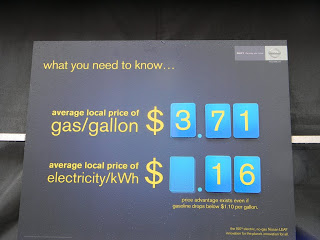 Under the tents there were all kinds of cut-outs and blow-ups and videos of the car in motion and also and a "what locations are w/in your 100-mile range" map/calculator toy -- but that's all available on the Leaf website.  I only photographed the above to remind myself how cheap our electricity is where I am in Bucks County (we are still paying less than 9 cents a kilowatt-hour).  Note the small print: price advantage holds even if gasoline drops below $1.10 a gallon.   That is one smug statistic! 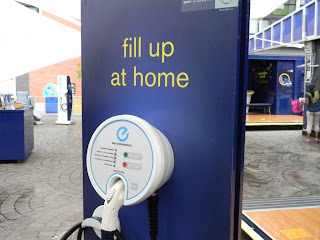 This display featured the "in-home" J1772 charger which is hard-wired to your 240-v outlet.  The Leaf also has a regular 120-volt inlet for use with ordinary household extension cords.  Our tour rep was pretty clear that Level II opportunity charging at (e.g.) Walgreens, which just bought a bunch of these stations, was not going to be a real need for EV drivers: "We don't expect you to be spending 5-7 hours at the drug store of course!  Most drivers will charge up exclusively at home."

Kudos to Nissan for stressing this.  On the other hand, every single rep we spoke to had been hired on specifically to put on the "Drive Electric" tour -- there were no Nissan engineers or even salespeople in evidence, just event specialists who were basically free-lancing.  There was no question they had been well-trained by corporate Nissan for basic show-and-tell, but they did not understand the car in depth, and that was a little disappointing for folks like us who already have a pretty extensive knowledge of the vehicle or of EV's in general; several times I heard tour reps run up against questions they simply could not answer.  ("Why is there a battery temperature gauge?"  "Is the make-an-annoying-noise-to-protect-blind-pedestrians button truly an option as indicated by the turn-off button, or is the whine/beep legally mandatory?") 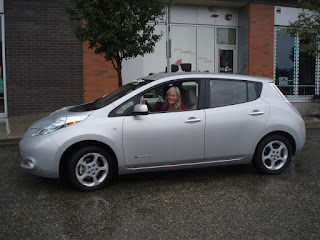 And my review of the behind-the-wheel experience?  This car is definitely more nimble & fun to drive than the Chevy Volt, esp in non-eco mode; after much quizzing of the event rep I finally gleaned that the more efficient eco-mode basically resets the throttle calibration and forces leadfoots like me to accelerate more slowly.

Eco-mode was more than adequate for city streets of course, but our event rep admitted that driving in it was a bit of a snooze and I much preferred the acceleration and cornering in non-eco mode, sigh.  The very availability of a choice between efficiency & power made me reflect on the fact that both the Volt and the Leaf are examples of contemporary "drive-by-wire" technology with a great deal of onboard computer-controlled communication.  Nissan has done a better job of making its Leaf optionally behave like what I still think of as a "real" car piloted by humans  (you can even turn off the ABS!) but its basic impenetrability even to someone like me who has managed to learn a thing or two about EV's during the last 5 years made me leave this sales event feeling, you know what?  I'm excited about production EV's and I know lots of people who will want to buy one, but I think I will stick with the build-it-yourself guys, because they are totally fun to talk to and will always give you the time of day.  Unlike, for example, corporate Nissan.

Oddly just as we were leaving the expo area, we came across the Popular Science tent (nominally part of the official festivities).  This tent was actually staffed by a person who made the thing he was talking about.   First I met the machine: 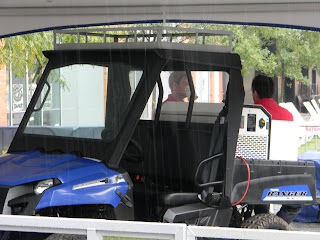 a converted electric Polaris ATV range-extended by a rather amazingly tidy and user-friendly configuration in the rear cargo area into a series diesel hybrid, extending its range exponentially from pure EV and increasing its viability as a deep-woods camping vehicle.


Only gradually did I realize I was talking to the guy who actually designed and built this conversion, a long-time staff photographer for Popular Science who has been described elsewhere on the internet as PopSci's "staff photographer/mad scientist."

John had a ton of other fun and cool projects, mostly in the green building line, and Anna and I totally endeavored to recruit him,  plus his sidekick & editor Doug who was on the scene & obviously a fan & fomenter of amazing DIY projects, for the PA Energy Fest.  C'mon Popular Science (not to mention corporate Nissan), join the fun!

The Nissan event was located right in Northern Liberties so after we escaped from the fascinating Popular Science tent we waltzed right down the street for Sunday brunch at the  Standard Tap.  This is relevant because EVs are totally local and so is a restaurant tbat features delicious heirloom tomatoes, in-season produce & exclusively locally-brewed beers on tap.  Oh Standard Tap you were already my favorite restaurant in the world based on dinner the other night, and then there was a pickled asparagus spear in my Bloody Mary this morning.  Obviously a stretch to firmly relate topically to this blog but like electric vehicles and the fun people who love them Standard Tap is totally awesome.