Congrats to Brandon, Kudos to John, and Hiatus


This is a belated and sadly abbreviated celebration of Brandon Hollinger's win of the EVCCON and our friend John Yecker's attendance of the entire event with his 93 Ranger.  (He did respectably in the drag race and had his truck written up at Gas2.org)!  John sent me a bunch of pictures and I really wanted to interview him about the experience before it all got too old -- but most of October has gone by and the time has come to regretfully give up on that even though it sounds like the Best Time in the World.)

There were other features I really wanted to share, too.  I wanted to follow up and get photos of those practically-new Dodge Colts EV twins for sale in Ohio and Florida.  I wanted to post my own interview with the guy who drives his electric Saturn Vue to the best local coffee shop for miles around, Rojo's Roastery in Lambertville, most weekends -- stupidly I never managed to connect with him in person myself, though back in April I did hook him up with the reporter from the Newtown Patch who did that nice write-up.

Maybe I will still get the chance to meet Dr. Oppenheimer -- Rojo's is just a jaunt down the river in the electric Miata and there may be some fine fall weekends left on which to give it a try.  Maybe I will eventually find the time to finish the post I've been working on that (with Jack Rickard's help, thanks dude) connects the grassroots EV-building effort I've been privileged to be a part of for the last 5 years to the 99% movement and throws in a little basic Marx to boot ... it was going to be an Olympic-class relevancy event!  But for now, external events dictate that I take a hiatus from Bucks County Renewables and minimize posting on this blog.

Alert readers will have noticed that I haven't been promoting that 10/22 mini-workshop that I was talking about earlier in the summer; alas! my association with the Green Jobs Academy has been formally concluded and I declined their offer of an instructor contract for that mini-workshop in September.  I also made the decision that promoting EV's has to be shelved for the moment in favor of nurturing my growing little Montessori school in Frenchtown NJ, which happens to be my actual paid job at the moment.

I have truly loved presenting talks & mini-workshops and overseeing three full-fledged hands-on conversions over the last 5 years.  I've talked to hundreds of people, formed ongoing friendships with some of them, had a blast, learned a lot (not just about electric vehicles but about founding a non-profit, making slide-shows & presentations, handling budgets & spreadsheets, fundraising, writing grants, administration, leadership, delegation, and building an effective team).  I am drawing on every one of those skills in my professional life and I am so grateful for all the training I got doing this for fun for all these years!  I'm sorry to have to lay it down now and I hope to find the time on occasion to post to the blog.

For all the warmth and acceptance and amazing support of the members of the EEVC and the many other EV drivers and advocates I've met, for the wonderful students in our hands-on workshops who safely and joyfully worked together to build the e-Van and our Red Hot little Miata, and for the many cherished collaborators I've had the pleasure of working with and learning from -- I am truly thankful.

Buses by the Depot 2011: Vanagons Turn Me On

Okay, it's been implied once or twice before on this blog but I thought I would come right out and give this post that full-on confessional headline. Of course there's a lot of appealing Volkswagen design on display in the multi-era bus panorama above but Vanagons ... ohhhhhh ... gimme a bunch of them parked all together and watch me get too squirmy and distracted to take my own pictures (this one swiped from BbtD 2010).

So I love displaying the e-Van at EV-specific shows, but I have to say that bringing it to Buses by the Depot 2011 this past weekend may have been my best idea ever.  Everyone there was a fellow fetishist.  Naturally, we had fun!

BbtD is an annual campout lovingly hosted by The Bus Depot in Green Lane, PA -- a nationally-known source for quality, affordable VW van parts.  Ron Salmon and his staff (good people all) have been organizing this campout in conjunction with a warehouse sale for several years now.  (I hit that sale & bought a shade canopy that clips onto any vehicle, EV display folks take note!)

Miraculously, the campout is held just 15 miles from North Montco Tech, so I was able to drive the e-Van there instead of being ignominiously (and fossil-fuelishly) towed.  It's the first time I've driven it to a show since 2007!  Must admit I was a little nervous en route; ever since we upgraded to 144 volts in 2009 our fuel gauge has not worked, so I had to have faith in Saint Bill when he reassured me that I would make it the distance.

I did, though not without some entertaining Little Miss Sunshine-esque moments, like the one early on where my 9-year-old daughter remarked from the back seat that the combination of my little moans of anxiety and the occasional grinding noise as I gradually got back into practice shifting gears without a clutch in actual traffic were making her a little nervous, and just at that moment I accelerated out of a stoplight and the side door slid all the way open with that solid Volkswagen thunk!  Eek!  "Don't worry sweetie, look, there's another red light coming up right here!  Hold on to all that camping gear okay?!!"

I hopped out, ran around to slam the door shut &  lock it, scrambled back into my seat in time for the light and we had no further really interesting adventures though my heartrate did not truly subside till I was parked at my campsite.

After that it was just straight up fun: talking to tons of people about the e-Van, ogling their buses in turn & sharing a delicious potluck dinner.  One of the best features of this campout is the communal meal on Saturday.  I was too busy eating to take pictures but Brendan did take one of me and his dad in front of the e-Van, which is basically my only documentation that it was there: 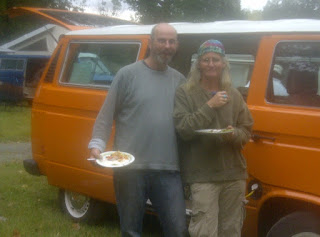 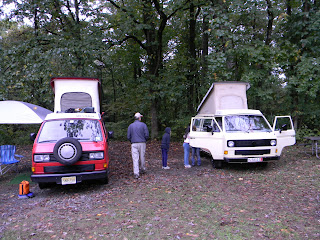 My friends Clark (red) & John (yellow) were there with their sweet pop-tops and unexpectedly I reunited with my long-lost pal Danno, who used to work on my first Vanagon and whom I haven't seen for years.  Danno's been living in his Vanno for the last year & it has some sweet mods that I wish I had taken pictures of, though of course they would have had nothing to do with electric vehicles.
Next post I will return to EV-specific and very exciting news, I promise!  In the meantime here is a photo of the secret reason I am in Vanagon heaven right now:


Click on the photo to hear/see "Vanagon Song: Explicit Lyrics" on the Susquehanna Valley Vanagon Club website, a fabulous video but emphatically NSFW or Small Children's Ears unless you want your toddlers warbling "I drive a motherf***ing vanagon" in front of your inlaws  by Thanksgiving.
Posted by jisaacs at 7:06 PM No comments: