On July 28 Bill, the e-van and I rendezvoused at NMTCC with Anna, who would like to see her vanagon begin the journey towards becoming an electric vehicle!

Anna and I were put in touch by Jim Crater, the visionary who runs Recycling Services, Inc. down in Pottstown, PA -- Jim has a wealth of encouragement, ideas and resources to draw on in a variety of fields including electric vehicles, alternative energy, interesting solar applications (like their Mobile Solar Electric unit that powers speakers with the sun!), durability, composting, preservation of open space & organic farming. Jim's an advocate of networking and practices what he preaches by putting people in touch with each other. So if you're in his neck of the woods, don't fail to check out the recycling center (on Tuesdays & Saturdays) and introduce yourself. 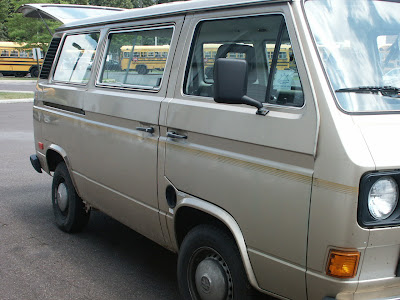 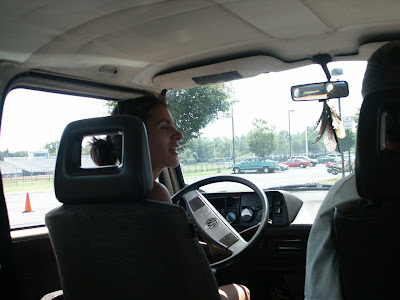 Anna got to test drive it, so she knows what kind of handling and response she can expect from her converted vehicle. 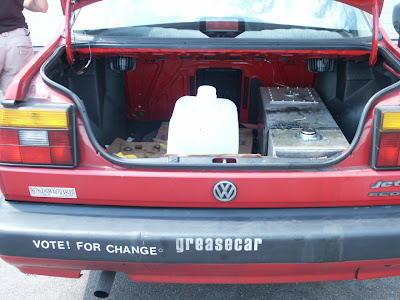 Her current vehicle is a veggie-oil burning Jetta converted by greasecar. Bill and I were happy to get to look at it! In the trunk is the metal tank for the veggie oil and a jug of her home-filtered fuel. 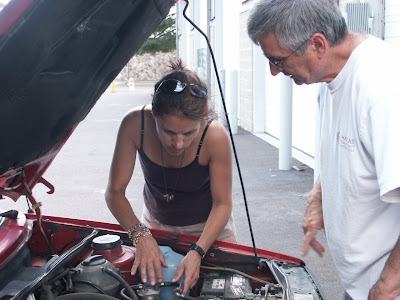 Anna knows a lot about how her adapted engine works but she did have some questions about hose position -- seemed like some of them were too close together and rubbing -- she and Bill had an enjoyable time troubleshooting and chatting. Anna's conversion will happen under the auspices of the Mid-Atlantic Renewable Energy Association, which will provide non-profit status for the project. We don't have a schedule yet for the conversion, but are standing by as she seeks funding for it! Stay tuned!

As far as the existing e-van goes, Bill anticipates using the van for regular commuting this fall, once it is fully re-registered as a modified vehicle. (It's insured and registered now, but we didn't re-title it yet.) We will bring the van with us to MAREA's Alternative Energy Festival September 19-21 in Kempton, PA, where we're presenting half-day workshops for folks interested in an in-depth introduction to the EV conversion process. Here's the official description from the program:

Converting a gasoline powered car to electric power is not a small project, but you can have a car of the future now. This half-day workshop explores the design options, conversion process and hardware selection for going electric. Offered twice, Saturday 9AM and Sunday 9AM. If class size is exceeded, a third session may be offered Saturday afternoon. Fee: $15. Coordinated by Jenny Isaacs of Bucks County Renewables.

You can sign up now at the Energy Fest website! We'll have Anna's van as the "before" model and plenty of opportunity to get a close look at the e-van and ask Bill questions about the process.

There are lots more activities and educational workshops available (even a weekend-long class on converting your diesel to a WVO vehicle like Anna's greasecar!) so do check out the website and plan to join us at the Fest. It's always a wonderful time.