Great great coverage of the 21st Century Automotive Challenge from local TV News Channel WTAJ.  Click on the image above or check it out here.
Posted by jisaacs at 4:56 PM No comments: 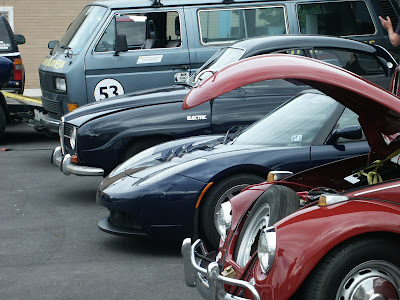 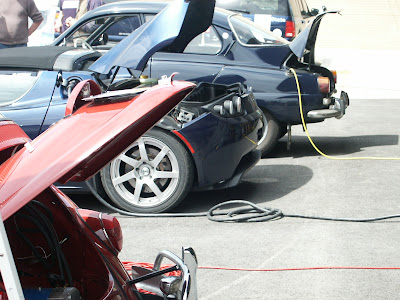 Okay the above are possibly my two favorite pix from the 21st Century Automotive Challenge, even if they capture only a fraction of the 100% battery electric vehicles present -- but what beauties!  This iconic line-up of a 1967 Volkswagen Beetle, a 2008 Tesla Roadster, a 1970 Saab 96 and a 1986 Syncro Volkswagen Vanagon was just a taste of the wonders of the event.  Yes, of course there will be more pictures to come, this is just a teaser! Click on the photos for a link to the feature article in the local Centre Daily Times. 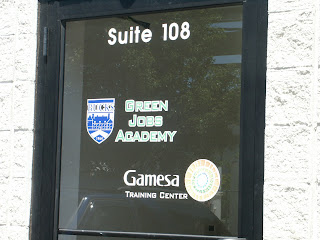 Last week Saint Bill and I had a very positive meeting with the acting director of the Green Jobs Academy, a brand-new consortium of Bucks County Community College and all the technical high schools in Bucks County.  The topic?  Adding EV conversion workshops to their roster of training programs. 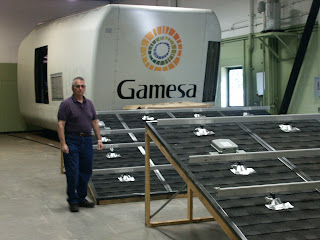 Here is a shot of Bill in their brand-new facility in Bristol:  there's a practice set of model rooftops (for installation of solar panels) in the forefront, while the Gamesa structure in the rear is the very top of a wind turbine that will serve as an educational tool in their wind energy education programs.  Cool stuff, and though the building's only been open for a couple of weeks one PV training has already been completed.  Our workshop would not be housed there (we need an auto shop!) but through the auspices of the Green Jobs Academy we hope to attract more service technicians and auto technology instructors as well as current automotive technology students.  Even more importantly, with such a sponsor I can also begin the rigorous process of seeking NATEF certification for the workshop.

It's all very exciting stuff!  Hope we can report more on developments in that department soon. 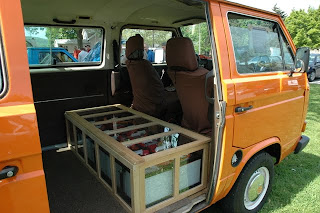 There's been so much activity I haven't even gotten around to posting shots of the e-Van's beautiful new interior -- the famous oak-and-Lexan front battery boxes above (thanks to the carpentry skills of Larry Dyer, who crafted them with such care) and the rear battery enclosures below, built by none other than Saint Bill, who -- much to his luckily very tolerant wife's surprise-- bought the table saw he's always wanted in order to make them. 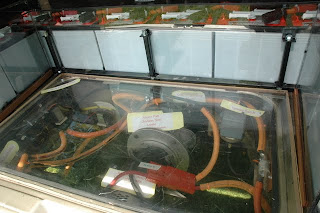 Okay, is the e-Van 2.0 not GORGEOUS?  I'm telling you, everybody who looked inside @ the Macungie EV-ent was wowed, so it's beautiful even if you didn't see the "before" version ...which all readers of this blog are privy to.

Meanwhile, I am working on a much longer post covering the wonderful 21st Century Automotive Challenge event in State College PA, to which SB &  I headed out immediately following the GJA meeting -- what a blast that was!  Look for a rave review here shortly.
Posted by jisaacs at 6:13 PM No comments:

I was in my local paper! plus EV myths and e-Van news


I Heart Having a Local Paper

This appeared on page 4 of the April 29, 2010 Bucks County Herald, which I read religiously because it is free, offers reliable and detailed coverage of both local politics and the rich arts scene of Bucks County, and runs Elizabeth Bowman's outstanding column "The Compleat Gardener" every week.  It is a thriving example of that now-rare institution once supported by many medium-sized towns and certainly every city -- the truly local newspaper.  I support the businesses that advertise in the Bucks County Herald because they're helping enrich my community by keeping this tradition alive.

Of course these local businesses need my committed support, because they themselves are continually under threat from big-box competition, as fascinatingly detailed by Stacy Mitchell in The Big-Box Swindle: The True Cost of Mega-Retailers and the Fight for America's Independent Businesses, a somewhat depressing book best read in conjunction with the cheerier The Small-Mart Revolution: How Local Businesses Are Beating the Global Competition by Michael Shuman.  But I digress! 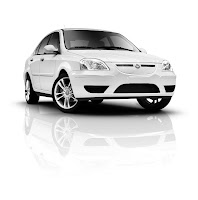 I don't know anything about the all-electric CODA sedan said to be debuting in the US before the end of this year, but their website is snazzy -- especially this excellent page examining and refuting some common myths about electric vehicles.

I'm afraid the e-Van news is depressing.   I've been working for the last two weeks trying to muster up a less-than-ruinously expensive tow vehicle, trailer and driver for the 21st CAC, but with all that begging and borrowing and putting all the different pieces together yet to be finally confirmed, we suddenly hit another major snag.  Remember the two chargers that failed us in the last week of April?  Bill pulled the Zivan and sent it off to California immediately following  the EV-ent, and on Friday I missed a voice-mail from their tech department saying it was ready and to phone in payment -- which led to that charger still sitting there on the West Coast tonight instead of winging on its way to us as I type.  There is no way it will be in our hands before we need to leave, and the back-up charger, our old Russco 120-volt, is also offline with an apparently faulty GFI!

Most worrisomely, when Bill took the e-Van out last week to run down the batteries and cycle them up again, he only got 10 miles from the charge.   It seems possible that they might have been damaged by having been partially discharged and then sitting for almost a year, or possibly by their interaction with the malfunctioning charger,  We would want to do some pre-competition testing before going ahead and committing to spending our limited funds on trailering the vehicle 400 miles for the 21st CAC.  And we simply don't have time if Bill has to charge the batts four at a time with two 12volt chargers ... it took two days to get the van charged for the EV-ent!

So -- in fact while I was in the middle of writing this blog entry, having finally decided that I had to share the two links above in the absence of any positive update on the e-Van -- Bill and I conferred and decided that we would not plan to bring it out next weekend.  We still will be in attendance, and I'll be able to get a taste of the experience without the stress and expense of towing.

Naturally I'll be covering the 21st CAC for the blog, though I may have to borrow a camera as mine has suddenly developed oddly similar symptoms to the van -- newly-recharged batteries wimping out long before expected.  Kind of weird, huh?  Battery problems everywhere I look!
Posted by jisaacs at 11:16 PM No comments:

Wow Doesn't Even Begin To Express It

May 1 EV-ent was a blast from start to finish.  YES!  You can see photo and videos on the May 1 EVent website (and be sure to check out our brag page for compliments from participants!).  In the video of the EV Parade you will see the e-Van, against all odds, rolling ... but even that moment couldn't compare to the one where she arrived triumphantly on the rollback, last-minute tow anxieties notwithstanding.

O what a beautiful sight in the morning.  The rest of the day was just cake and gravy.

Before I go (remember, if you didn't already you were going to go watch the fabulous videos Linda Swynerski of Four Magic Acres shot and shared that're up on the May 1 EVent website) I must give a shout-out to recent developments in the local alternative fuel movement. My local CSA, Blooming Glen Farm, will henceforth be fueling its farm tractor with waste veggie oil from Bucks County Freedom Fuel.  Yes -- now my produce will be fossil-fuel free!

As Farmer Tricia writes in their wonderful newsletter The Blooming Glen Beet:


Business partners Andy Rumbold and John Morano have been good friends for years. Early in 2008 they learned about making biodiesel from used cooking oil. They started learning about the process, made small batches and today they are processing about 200 gallons per week, turning what was a restaurant waste product into an alternative fuel! They are Bucks County Freedom Fuel and they collect used vegetable oil from dozens of restaurants in Doylestown and Perkasie and the surrounding communities. Participating establishments are listed on their website and they're always looking for more.

According to Andy Rumbold, "John and I originally started making biodiesel in 2008 for economic reasons like many others who have since abandoned it. We are proud that we are providing fuel for our own homes and vehicles and that we can share excess with the community. No war, no drilling, and no spilling required for our biodegradable and sustainable fuel."

As the ruptured oil well in the Gulf continues to pour oil and devastation into the ocean, here at Blooming Glen Farm we are happy to make the switch to a more sustainable way of fueling our tractor, one we can feel great about.

I've already written to the Freedom Fuel folks expressing the hope that we can join forces here in Bucks County to help promote a variety of fossil fuel alternatives that can meet the needs of both commuters and farmers right here in our community!

I know you didn't forget to check out that May 1 EV-ent website, stay tuned for news of the e-Van as we race to prepare for the 21st Century Automotive Challenge at Penn State in two short weeks!
Posted by jisaacs at 10:45 PM No comments: