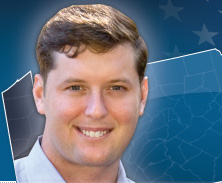 RE-ELECT PATRICK MURPHY TO CONGRESS
I don't usually do this, but with Election Day just a couple of days away I wanted to take this opportunity to share with you Bucks County Renewables' enthusiastic support for Democrat Patrick Murphy, the congressional Representative for all of Bucks County, parts of Montgomery County and Northeast Philadelphia.  Those of you who know me know that I'm a registered Green and don't automatically vote for Democrats, but this is one Dem I support wholeheartedly.
After serving in Baghdad 2003-4, Murphy was the first Iraq war veteran elected to Congress, He took on a leadership role in the debate on Iraq and Afghanistan and has been one of the sole representatives to consistently question our country's vast expense and waste of human resources in the Middle East.   In his first month in Congress, Murphy introduced the Iraq War De-Escalation Act of 2007.
An advocate for clean energy and environmental jobs, Murphy has put money where his mouth is by founding and finding funding for the Green Jobs Academy in Bucks County PA.   A coalition of the 5 Bucks County technical high schools with Bucks County Community College and a variety of private industry partners, the Green Jobs Academy provides both long and shorter term training programs geared toward workers looking for new skill sets in the green and sustainability industries.  If you click on the "Coming Soon" link at their website you'll see that electric vehicle conversion is one of the topics on the horizon -- look for an official announcement soon of upcoming lectures and workshops offered by yours truly & Saint Bill!
This is a phenomenal opportunity to extend the outreach of our program and I have been very pleased with the support from Green Jobs Academy and their superb administrative assistant, Clorece Kulp, as we work towards putting this initiative into place.
I had the chance to meet with Patrick Murphy at a fundraiser a few weeks ago and  I told him all about our EV Conversion workshops and thanked him for initiating the Green Jobs Academy.  He called me out by name during his speech, which was awesome, but I blew it and didn't ask for a photo op afterwards.  Oh well!
I was pleased to find that I liked Murphy personally.  He's a wonderful, inspiring speaker and you can see that he's an affectionate family man who manages to keep his family around him while busily campaigning -- his two children, wife, and parents were all in attendance.
So if you're in Murphy's district, and especially if you're an independent wondering which way to go in the coming election (which has been long on negative campaigning and short on issues), please know that he's a friend of electric vehicles, green job creation, and the environment.   I'll be casting my vote for him with real enthusiasm, and I hope you'll join me.
Posted by jisaacs at 5:19 PM No comments: 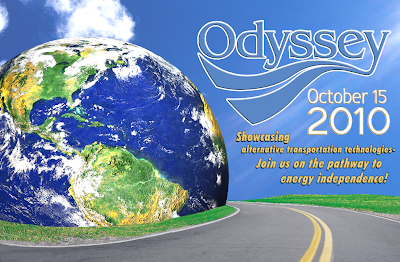