SO MUCH FUN #2 - NATIONAL PLUG IN DAY @ FRENCHTOWN GREEN FAIR

We had beautiful weather & an incredible turnout for the 2013 Frenchtown Green Fair and National Plug-in Day event.  2 converted EV's came all the way from Lancaster PA (86 and 100 oil-free miles respectively) -- big shout-out to John Yecker & Brandon Hollinger for their support!  6 production vehicles were also on display: 3 Nissan Leafs, 1 Chevy Volt, 1 Smart Electric Drive, and a Tesla Model S that rolled in unexpectedly at the last minute (too late to be in the panorama shot above).


A total of 642 oil-free miles were traveled by the EV's attending this event, and a great time was had by all!  Thanks so much to the drivers and visitors -- a few shots below:

Mayor Warren Cooper of Frenchtown, NJ came & doffed his hat to electric vehicles, and I'm pleased to report that his photo was featured in the Sierra Club's national blog! 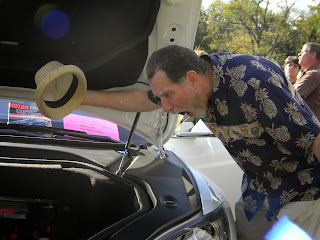 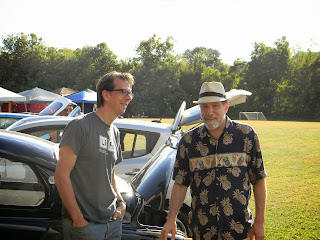 Mayor Cooper and Brandon "Rockstar" Hollinger surrounded by vehicles of the future. 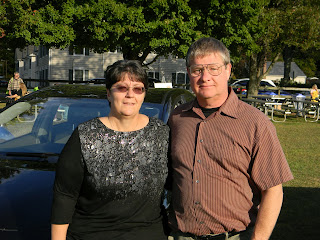 Don & Kay Barry came out to Frenchtown from Lehighton PA.  Don was the first EV driver I ever met, back in 2006 at the Kempton Energy Fest.  He converted his 1983 Nissan pickup truck to 100% electric drive in 2000 and has been using it ever since! 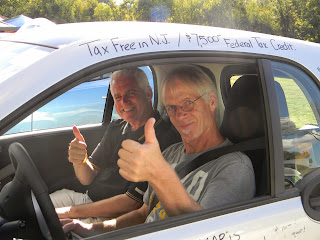 EMBARASSING PUBLISHING GLITCH DEPARTMENT:  I am sorry to report that this report somehow got stuck in draft mode instead of getting posted in September, and because I have been very lazy recovering resting on my laurels for the last 2+ months the oversight escaped my notice till today, when I logged on to post the excellent Consumer's Union/Union of Concerned Scientists info-graphic on EV ownership.  Belated but sincere thanks to the Frenchtown Green Fair committee for another wonderful event, and to National Plug-in Day for making this the easiest EV display to organize ever!
Posted by jisaacs at 10:06 PM No comments: