One Cool Controller, & a trio of banging Leaf videos

Update on the e-Van: 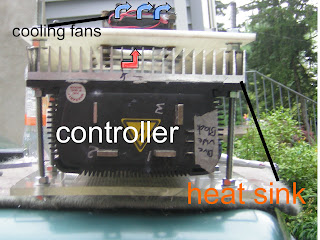 The repaired Zivan charger is back in.  Immediately the controller started running hot on test drives!  So I ordered another heat sink, and Saint Bill went to work remounting the controller with cooling fans on top (since hot air does rise). 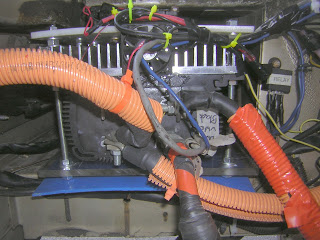 He also fixed matters so that the controller is no longer grounded to the e-Vanagon 12V system, whatever that means (not sure if that wrong controller mounting was done in our first workshop or second time around).  But now we are good, with the controller running cool and grounded correctly -- or um, maybe not grounded at all if that's the way it's supposed to be.  I forgot to ask Bill to explain it to me again.  As anyone who has ever heard me give a talk knows, one of the funny things about me being a big advocate of EV's is that I have an intractably vague concept of how electricity works, despite having been exposed to repeated instruction.  It's just not sticky in my brain for some reason.  Regardless, I'm aware that there are lots of folks out there driving blithely around in internal combustion engine vehicles without the slightest comprehension of what a carburetor does or what on earth is going on in there to make their cars go -- and I figure that, like me, some of those people are prospective Leaf owners.  Which is by way of an excuse to post a side-bar to the ever-improving driveability of  the electric Vanagon (also now fully street-legal and proudly sporting her antique plate!) in the form of two delicious videos that make me long to plug in our first production EV:

Seth Rothenberg of the NJ Electric Auto Association took a train through that blizzard and appeared in this elegant appraisal of the advantages of EV's in cities ...

I am not usually one to post actual breaking production EV news -- that is the role of esteemed Eastern Electric Vehicle Club member Daniel Monroe, whose weekly news update last week included the delightful information that Toyota plans to bring out a new RAV4-EV in 2012.

Stay tuned for further breaking news on the e-Van (and -- we hope -- sooner rather than later on the refurbishment of our 1991 Dodge Colt, which  was converted when it was brand-new 19 years ago  and is desperately in need of an upgrade!).  Can't promise that there won't be summer lulls, but work is already afoot by the dedicated elves of the Mid-Atlantic Renewable Energy Association to bring us all another wonderful Pennsylvania Energy Festival, and so I too am beginning to round up cars and make plans for a weekend celebration under the Alternative Fuels Tent.  The annual high point for me is the Q&A panel with all the exhibiting EV driver-owners and long-time EV experts on the premises assembled.  It's a privilege to moderate such a wealth of experience and scary-deep technical know-how!

With mainstream production vehicles in the pipeline and the DIY community energized and gaining national attention (Mike Brown of Electro Automotive was just interviewed on NPR! http://tinyurl.com/EVsonNPR), it is an exciting time to be an EV advocate.  I hope you will be joining us at the Energy Fest this year!
Posted by jisaacs at 8:45 PM No comments: