Wow, one of the e-Van's batteries exploded, Plus Miata Update 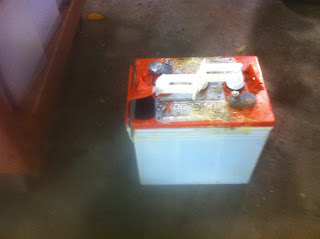 I don't have much more information besides this photo but in case I forgot to mention why the e-Van was on the disabled list and a no-show at Macungie: this!  Cooperatively our only explosion to date at Bucks County Renewables occured within walking distance of Saint Bill's house, so he was able to walk home & fetch the tools to wire around the carcass of this US Battery and limp on home.

Here's the good news and more pending: the Miata passed its Enhanced Safety Vehicle Inspection and we have applied for title as a modified vehicle.  Street legality is approaching as convertible weather becomes ideal, AND the bad cell has been replaced with our one extra.  The pending even better news includes the imprimatur of the Commonwealth of PA on our application, after which our very nice Enhanced Safety Vehicle Inspection Officer Preston can affix our inspection stickers and the Miata will be street-legal.  By that time I am sure that the battery pack will be re-secured, removing the cell was a drama indeed and involved Saint Bill giving his blessing to Matt cutting through a restraining bar and replacing it with wire.  I will try to document the replacement process so that I can recapitulate some of the removal, it was pretty epic.  Anyway just wanted to let you all know there is actual work going on around here at BCR's global HQ!  Coming soon: one of this blog's patented flashback posts:  fuller coverage of the Macungie EV-ent (in the meantime the website has been updated) AND news of an upcoming hands-on workshop for hybrids in Burlington in August!  Stay tuned!

EV Picnic in Macungie May 5 & a trailer for the 21st Century Automotive Challenge this weekend!

The 4th "and concluding" EV-ent in Macungie went off so swimmingly that we were relieved, here at Bucks County Renewables, of any apprehensions we might have had about barely promoting said occasion, least of all here on the blog.  I was, nonetheless, mightily puzzled today to find that only a blank draft entitled "EV Picnic on May 5!" existed when up till now I seriously believed an entire promotional piece had been composed and posted on April 12.   Sigh, maybe I only dreamed that I wrote it, in one of my horrible realistic dreams.

Pictures and a write-up of the EV-ent in Macungie were fortunately forthcoming from eco-modder Jeff Haskell, who returned for a 2nd year to the EV-ent and once again saved the day as far as official recording went -- we had 15 vehicles, which was amazing, and so much fun that I am worn out all over again just thinking about it!  Hurray for us!

In signature Bucks County Renewables style, I had left everything having to do with towing the Miata to Macungie to the last minute and then some.  Meanwhile Saint Bill was all organized with a tow vehicle for the e-Van (grrrr).  The Miata being not street-legal owing to a personal pathology involving me and filing forms in a timely manner, I could not just drive it there.  Fortunately, the e-Van blew up a battery (considerately not very far away from Bill's house, so he could return on foot) en route to its pre-show clean-up, making a big mess & putting itself firmly on the disabled list.  Ta-da!  With the e-Van out of commission the Miata had a free tow & a friendly driver -- plus I helpfully got my back dirty and everything learning how to hook up chains and tire straps!  So we GOT there, and had a wonderful time.

Did I mention there were fifteen vehicles?  And everybody there was solidly talking to each other, trading tips & learning stuff, or in John Yecker's case lending out parts (an old lead-acid charger to tide over Dan from last summer's workshop, whose charger for his EV is being reprogrammed to take lithium!) or collecting them (the controller we borrowed to make the van go in September).  It was relaxed, fun, & educational!

Our Fearless Leader Anna DiGate and I were so pleased with ourselves that we swore we would do it again.  I also distinctly recollect that Brandon signed on as the Sign Person, and hereby nominate him additionally as Chief Organizer & Official Eye Candy of the Fifth and Not-Final EV-ent in Macungie.

I was so cross with myself for not having executed the long-promised enhanced safety vehicle inspection the Miata requires to be properly titled as a modified automobile and back on the road 100% legally, that I actually initiated that journey this week BUT I cannot spare a minute to recount what turned out to be a tortuous adventure because, while I have been dawdling around not posting about the EV-ent the 21st Century Automotive Challenge has ben sneaking up on us!  And look!

Shared just tonight (yes, this is breaking news, people) by Ollie Perry, the President of the Eastern Electric Vehicle Club, this real-time video features our favorite man of mystery, Dan Monroe, in the biggest cliffhanger of his Saturn's build so far, as he races to complete it in time for the event this weekend!