Shout-out to Jonathan Belak, president of Three Rivers EVA and owner of PA Electrics, who wrote this letter below to "spark" an EV gathering at the Mother Earth News Fair in Seven Springs, PA this coming September. Read on for details!

I am the President of the Three Rivers EVA and was saddened to hear of the cancellation of the 2012 Pennsylvania Renewable Energy & Sustainable Living Festival held in Kempton, PA. This was the yearly get-together event for representatives of several clubs from the EAA. This was a time to renew old friendships and make new ones, show off one another's projects and just have a good time. But 2012 would be different with the cancellation. 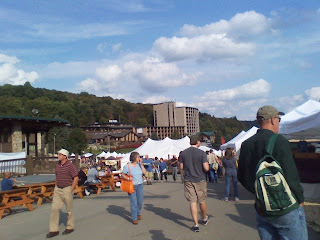 Our club was contacted around the same time as the cancellation by Mother Earth News about attending the second annual Mother Earth News Fair - Sustainable Living Festival which was to be held over the same time period that the event in Kempton was to take place. This festival would be held at the Seven Springs Mountain Resort, just off of the Donegal exit of the PA Turnpike. The event was free for our club to come and exhibit vehicles at, for the three days the festival was taking place. We were told to expect at most 15,000 people over that time period. This was based on the prior year's event and past events that Mother Earth News has sponsored.

The estimate was off just a little bit. We had that many people at the festival the first day and by our and some other vendors accounts for the three day event, crowds reached around 40,000 attendees. We not only talked to people from the northeast but from as far away as Montana and down to Florida. I have attached some photos from workshop attendance and just some crowd photos to show the amount of attendees. 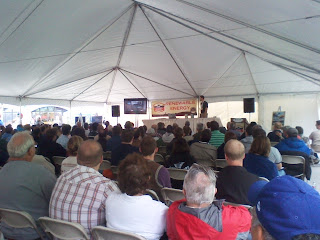 I would like to make a proposal that this Mother Earth News Fair event become a yearly EAA get together on the East Coast. This year's event is to be held September 20th, 21st and 22nd, the week prior to National Plug in Day. There are several hotel besides those at the resort within fifteen minutes travel time to the festival. There are numerous campgrounds with in that same travel time from the resort. There are also condos and houses available for weekly rentals nearby. This is not during peak ski season so prices are much lower for these however they can book quickly. 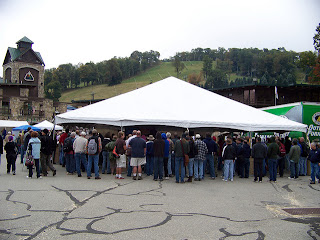 If you are interested in attending this year's event please let me know so that we can get in touch with Mother Earth News as soon as possible to reserve a display area. Our contact at Mother Earth News has not contacted us about confirming our attendance for this years event, but we would like to give them a tentative number of participants when they do. More planning needs to be done before the event but it is never to early to start that process.

Please feel free to pass this message on to other people who might be interested in this event.