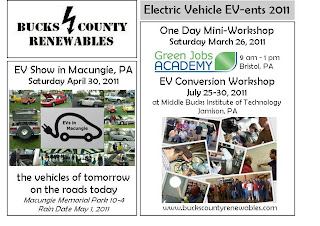 This is the announcement I made up on January 14, 2011 for the class that is happening right now, folks!  I wrote my first email to the Green Jobs Academy in January 2010 (it would be four months and a few more emails before our first meeting with them) so really this project has been in the works for a year and a half.  Needless to say Bill & I are both thrilled to be actually in the auto lab working on the car!
Today was magnificently full of steady work & rapid progress combined with surprising challenges & rising to the occasion. We began class as usual with a review of the reading & some discussion,  but then I got everybody to watch me open up our charger, which had been delivered the day before to my house.  After removing the packaging I encountered surprising challenge #1:

Alarmingly, the label of the charger indicated that EVnetics had sent us entirely the wrong component.  I noticed that it was marked 120 volts and Grant went further into the small print to point out that it was also for lead-acid batteries.   We have a 144V system and lithium-ion batteries.

Upon closer examination, it appeared that the original label was a reused one that had been stuck on after the fact  (I forget who made that observation).   The manufacturing data indicated we had the correct charger for our needs and could go ahead with the install.
Somehow during the course of these discoveries we also had a great group brainstorming session and came up with 3 or 4 different ways to prevent a driver from pulling out while still plugged in to house current, all of which were pretty cool.  After that a few folks quickly gravitated around the charger project while everybody else knew exactly what they wanted to get going on so we broke for hands-on without more ado.

Shortly the charger work group encountered surprising challenge #2: the Anderson connectors for the wiring were missing terminals in one half of the mount.  Fortunately we have some of the necessary terminals left over from the DC-DC converter so we could work around this!
I got shots of everybody doing hands-on but Dave today for some reason, so I will note here that he is one of our discussion mainstays as he has done a lot of online research already and is invariably familiar with the websites and resources we mention.  He and Dan both attended the Macungie EV-ent in April and have also been to the annual Energy Fest in Kempton to see EV's on display, in contrast to Richard who reports that his one previous exposure to the real thing consisted of being passed by a RAV-4 EV on the highway in Florida once!
Here is a somewhat ragged photographic documentation of the day: some of the time my camera batteries were charging (blush) and some of it I was visiting an electric supply shop (for possible inlet charging plugs), a welding shop (for a new gas canister) and a hardware store (for bolts, about which much more shortly).  I was a very hardworking gofer today but I had Glenn's company during the first run so I got to be on a team too which was nice & very much the theme of the day!

This is I think a very arty photograph indeed of Jack's elbow and the beginnings of the new angle iron supports running under the front battery boxes.  (It was even artier when I had it sideways instead of up-and-down.)

Rich & Julie peaceably and happily gooping and installing interconnects -- they really do like to work together and they do it incredibly well!  Their assembly line approach was efficient and they made short work of the interconnects that can be done while the front box is being worked on.  (Some of them will have to wait till the batteries go in the box.)
Once done with the front batt connections R&J had time to chime in on a group discussion around the trashcan concerning a surprising challenge with the connectors for the high-voltage cables, which are difficult to situate securely without making them difficult to disconnect for battery replacement/maintenance.  Disassembling them this time around required a screwdriver levered between the existing washer and the terminal, and Bill would like to avoid that in the future.

Here Glenn, Rich & Julie & Bill are having an amazingly extended conversation about some very tiny but crucial bits of hardware.  That's what it comes down to here in Real World EV-Building Land!  I know this because in my supply runs yesterday and today I spent at least 45 minutes in two separate hardware stores seeking out tiny but crucial etc.

Yesterday I just wanted one piece of all-thread plus two nuts that would fit it, and today I was in search of two button-head socket bolts to lower the profile of the existing motor mount bolts.  During both trips it took two store employees and a lot of head-scratching before I could cash out with the desired items, and I was not in a big box store dealing with some hapless non-starter in the bolt department either -- today I had old experienced guys squinting at threads and deciding together that a lot of the bolts in their box were actually defective, and then patiently testing them all till they found one that worked in the size I needed.   I got a lot of service for the five bucks I spent at Sears Hardware today!

But I'm getting a little ahead of myself since there are still a few pix of the morning work session and gofering was after lunch.  While Jack & Chris front battery racks were being worked on Ben & Dan were also assembly-lining the goop-and-screw-down-interconnect process on the previously installed rear batts.  Teamwork really gets things done fast.

Richard, Ralph & Chris consulting further on those high-voltage cable interconnects.  Chris is blurry because I missed the shot where he had his hand on the cable too.

Bill is using a power grinder to put a lip on a screw, which was the work-around arrived at by the discussion around the trashcan.  Look at his arm muscles!

Richard pointed out that we still had a spot in the car where wiring was going through metal and required a rubber grommet for protection.  I think this got taken care of today but I'm going to have to wait for the debriefing tomorrow to know for sure.

We were supposed to have an afternoon presentation by a representative of Keystone Charger, but he had a medical emergency and his sub asked to be rescheduled for tomorrow morning.  Instead the class moved eagerly back into work groups immediately after lunch.  I was on the aforementioned supply run for a big chunk of the p.m. session and by the time I came back the charger had been cleverly located in the space between the front seats and the trunk and nearly all wired up.  Above, Grant is making some final adjustments

with help from Ben, Jack & Chris -- I told you teamwork was the theme!
These were the early afternoon assignments as written.  Sometimes I have to laugh at how detailed & yet sketchy our structure is!   It seems to be working great though!