I've been saving up my Brandon Hollinger story for too long.  Now that he's officially come out as an EVAmerica conversion shop I have to devote my triple-digit-blogpost to promoting his work. 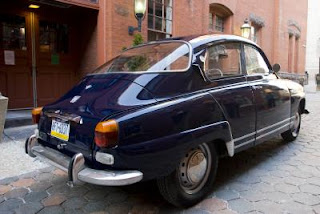 I'm gonna confess right now that I think this car is sexier than the Tesla by far!  You've seen this lovingly-restored Saab 96 on this blog before (it debuted at the EV-ent in Macungie back in 2009, was displayed at the PA Energy Fest in September 09 and 10, and won an award at the 21st Century Automotive Challenge in May of this year).  But you may not know that Brandon turned up at our Energy Fest workshop back in September 2008 without any cash on hand and talked his way into the class saying, "I didn't know there was a $15 fee, I promise I'll send it in -- I already know I'm going to convert my car."  Of course I let him in, and I was pleased a couple of weeks later to receive the promised check in the mail.  I wasn't expecting to see him rolling his finished conversion into Macungie the following May!  He's not just an honest guy, he follows through on what he says he's gonna do.
Brandon says if he  can convert a vehicle anyone can.  A musician by trade, he had never done more than change his own oil before he saw Who Killed The Electric Car and became an EV convert.  He researched online and used resources like (ahem, self-plug) our one-day workshop to transform this classic and beautiful vehicle into battery-electric operation and keep it on the road as a daily driver.  Brandon is well into his 2nd conversion -- a Mazda Miata which will sport a lithium-ion pack -- and has gotten some terrific press coverage of his efforts, which you can admire on his brand-new website www.amprevolt.com.   Although he believes anyone can convert their own vehicle with a little self-education, he has officially opened up shop as BH Electrics to perform conversions for those who just don't want to do the work themselves, and I am delighted to endorse his new initiative.
The big EV news this week was the release of the trailer for the Who Killed the Electric Car sequel.  Go Chris Paine and Chelsea Sexton -- they said they'd go for it when their Facebook page reached 10,000 fans and hit the magic number last Friday!
Official Trailer: Revenge of the Electric Car
California resident takes delivery of first Nissan LEAF
Do Electric Cars Still Suck? Fully Charged vs Cnet UK (Video)
Turning More Heads Than a Tesla? The Beautiful Miluira Retro Electric Roadster from Japan
"Rocket Trike" Cleanly Travels From Colorado to D.C.
Dow Kokam, PVI partner on electric refuse truck for Parisian suburb
After-market hybrid retrofit
Ford Starts to Ship an Electric Delivery Van
Senate unanimously rules in favor of noisy hybrids, electric cars
Get In Line to Test-Drive an Electric Car From Hertz
BMW ActiveE Electric Car Spied Testing
Posted by jisaacs at 2:18 AM

Charlie Sexton and Chris Paine are politically naive fools suckered in by GM and deluded by Big Auto compliance vehicle PR greenwash.
They still have not figured out the real issues.
Google EV WORLD LIBERATE NIMH
For some real issues and insight.

Although this comment was a little rude, EV World's "Liberate NIMH" article by Howard Simon Marks is indeed worth googling. It's passionate to the point of incoherence, but that happens to me sometimes too!