Yes I DID Drive a Tesla Roadster! 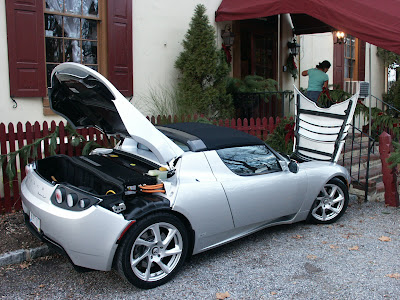 Oh boy oh boy yes I did, thanks to the kindness of Tesla rep Michael Sexton, who squeezed me on Friday afternoon when it turned out all the Saturday drive slots were taken, answered all my questions knowledgeably, laughed at my humorous EV riffs and said he was going to steal some of them, and was incredibly tolerant of my initial nervousness about being behind the wheel of a $110,000 sportscar for the first time in my life. 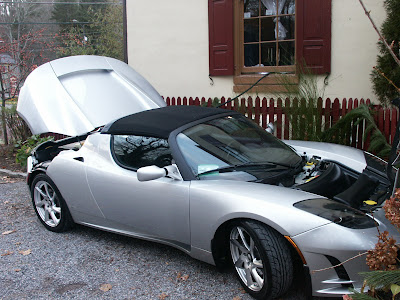 So, meet the Tesla Sport Roadster model 2.5.  I quizzed Michael all about the differences in this version, and he pointed first to the new nose.  Vents have been added on the front and sides to increase the aerodynamics of the vehicle; the gill-like side vents are clearly visible here in front of the wheel.  In this photo you can also see the somewhat makeshift extension-cord-through-the-window arrangement he's using to top off -- turned out the Center Bridge Inn didn't have an accessible 240v plug, so he was just using ordinary household current, but while I was there the electrician arrived to remedy matters in time for tomorrow night's charging.  Now that is an accommodating host facility!

This is the 2nd time the Center Bridge Inn has hosted a Tesla test drive event, and Melissa -- the friendly, helpful manager who saved me from despair when my camera batteries gave out in mid-session by taking the all-important Jenny-behind-the-wheel shot -- tells me that she's so sold on EV's that she's working on installing a charging station for their customers.  For her the "aha!" moment came when she calculated how much it was going to cost the hotel cost to charge the visiting Tesla overnight.  It came out to $4.00 -- and that's for 200+ miles of range!  She was amazed at the miles-per-dollar value of an EV.  Even when our electricity prices zoom up in PA next year, fuel-free driving will still be a bargain!

Although the Tesla is no bargain, the price of the 2.5 hasn't gone up -- just the range.   The major interior improvement was to the touchscreen video controls; the screen has doubled in size (to 7").  It was very visible which -- as you'll hear -- was helpful to me on the drive itself. They've also added HD radio and a couple of other electronic bells and whistles; upgraded the steering wheel and made minor changes to the seats.  Michael said the nice thing about Tesla's flexible, software-based production approach is that they don't have to wait for a whole new model year to put in improvements -- as soon as they innovate, they can start implementing improvements on the vehicles as they're rolling out, and this will scale up even as their manufacturing volume increases.

That exemplifies what I think of as Tesla's corporate intelligence, as illustrated by their business plan from the get-go: to begin by targeting the high-end market in order to generate the capital to bring a more affordable sedan into production.  If you ask me, this gutsy start-up succeeded in embarrassing the major car companies into bringing mass-market EV's to the public sooner rather than later -- and that makes me a fan. 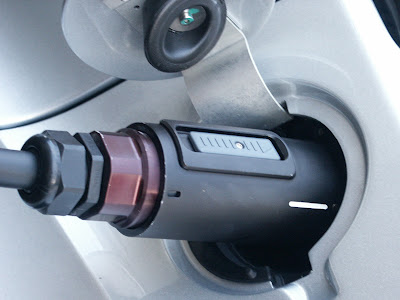 Here's a close-up of the charging set-up.  The Tesla does not use the new J1772 connector that was approved as a standard last fall by the Society of Automotive Engineers -- Michael rather ruefully confessed the company had hoped their connector would become the standard (after all they brought the first production EV to market way ahead of GM & Nissan!), but they'll soon be bringing out an adapter so that Tesla owners will be able to use the new standard public EV chargers.  Not seen in this picture are the flashing lights that surround the coupler as it's charging -- a handy "I'm fueling up now" signal, though Michael said that feature turns off when you lock the car, in case you want to charge without drawing any special attention to the vehicle.

Hard to imagine how the Tesla could fail to attract attention whether the charging outlet is blinking or not.  Outside and in, it's pretty sleek and sexy.  Also, very very little.  I was amused to discover I didn't even have a place to put my bag -- I had to stow it in my own car before I finally got behind the wheel, nervously adjusted the driver's seat and mirrors (both fully manual), and pulled out of the Centre Bridge Inn to go for our cruise.  I was too cowardly even to attempt a left turn out of the inn's driveway, and took the easy right instead, over the bridge to Stockton, NJ and then down Route 29 towards Lambertville.  After having driven the mini-E I was accustomed to the fact that every time you lift off the gas, the electric motor stops (also true on the e-Van, but since that doesn't have regen you still keep rolling -- in the mini-E and Tesla, you slow down almost to a stop).

Frankly, I was so nervous at first I could barely make it up to the speed limit.  Initially I had trouble even seeing my mph (I kept accidentally looking at the indicator telling me how many amps I was pulling instead, which was hilariously misleading since it varied from 9 to 50), but with a few taps Michael pulled up a larger display on the video screen and I firmly dedicated myself to not being too hideously wimpy.  By the time I turned around in Lambertville I had mustered up the nerve to deploy some of the Tesla's famed power in order to make my left turn ahead of oncoming traffic and then get up to speed.  It felt like this: ZOOOOOOOOOM.  (Imagine a very quiet zoom.)  I didn't quite achieve what Car and Driver once wrote about the Tesla's acceleration ("Slings you forward like a rubber band off the finger of God") but I certainly outdid anything I've ever experienced in a Volkswagen Vanagon or even in my ridiculously overpowered Highlander Hybrid.  Wheeeeeeeeee!

Some days it is really, really fun to be an EV activist, and this was one of them.  Oddly, however, this was not the highlight of the week here at Bucks County Renewables!  I will post the Really Big News later this weekend --  along with the all-important Jenny-behind-the-wheel-of-Tesla shot, which is still in transit.  Stay tuned!