Well, THIS was a pretty exciting moment last weekend ... the way John described it afterwards -- "Late on Sat. Ed Begley Jr. stopped by the Alternative Fuel Car Show at the Mother Earth News Fair near Somerset, PA. Since most people had left I had him captive to look over my electric truck conversion. As you can see we are now best buddies." 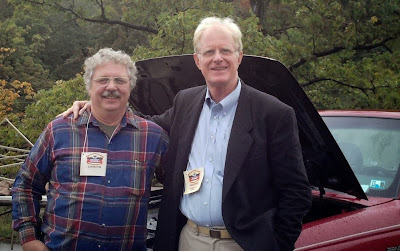 I got to take this picture WOOT!  It was a typical heart-pounding narrow brush with the moment going completely undocumented, because first my camera wouldn't even turn on (er, I had forgotten to take the lens cap off) and then when Bonnie B. was fetching hers she dropped it in the car and 4 AA batteries hopped off in different directions, but once I located them she got the whole caboodle rapidly re-assembled and rebooted the camera successfully, so áfter Ed had looked over John's 1993 Ranger there was time for a quick photo session.  I have seen John tour folks over his truck many times since we first met at Kempton in September 2010 -- this one was a definite highlight!  Thanks to Saint Bill for forwarding me the photo.

I took more, even, and will post further on Mother Earth News Fair I promise but right now I'm getting ready for Saturday's FRENCHTOWN GREEN FAIR .  If you want to meet Big John himself, along with Brandon "Rockstar" Hollinger, they'll be putting more gas-less miles on their conversions in order to join a line-up of production EV's celebrating National Plug In Day @ the Green Fair on Saturday.   Can't wait to see YOU there if you're reading this ... hey, Dan Monroe, I'm talking to you!

Realtime update on Miata prep:  the 12 volt battery & the lithium pack are charged up & the tires inflated.  Perhaps yesterday's pessimistic prediction that I'll be reduced to abject towing was unwarranted -- fingers crossed ...
Posted by jisaacs at 6:03 PM