Plugging Electric Drivetrains into Trucks  This is a good overall summary posted on the Reuters site but noting that the material actually came from Matter Network I visited there and immediately ran across this terrific EV truck from Italy:

look it is called a T-Rex that totally made my day, maybe I will send this link to Ryan North though I am shy about that seeing as how I have been totally plagiarizing his writing style lately.  It turned out that Matter Network actually picked this article up from Gas 2.0 which turns out to be an entirely awesomesauce blog (where the writers deploy words like "awesomesauce").  You should certainly check it out.


SIM-Drive Corporation develops in-wheel-motor-EV  Ecoseed reports on this different concept for EV's -- the electric motors are in the wheels!  Japanese company SIM-Drive has produced the first prototype and is planning mass production in 2013.


Chevy Mi-ray Concept Introduces Mid-Electric Drive System  EV World showcases this concept vehicle developed by GM Korea and introduced at the 2011 Seoul Motor Show last week.   "Mi-ray" is Korean for "future" so I guess they agree with us here at Bucks County Renewables that EV's are the vehicles of tomorrow, on the roads today.


Kia Rolls Out Naimo Electric Car Concept  Also at the Seoul Motor Show, Kia offered up an electric CUV (crossover-utility vehicle), joining the Venga (which debuted  last year at the Geneva Auto Show) and the adorable little POP city car (which was showcased at the Paris Auto Show).  Let us all worship costy at qsautonews.com for the following fabulous line in his POP review back in 2010:   "like what Hello Kitty might drive if she lived in the Tron universe."


Brooklyn Motorized: Electric With a Jolt of Retro Style and removable batteries (for charging in your apartment) to boot. 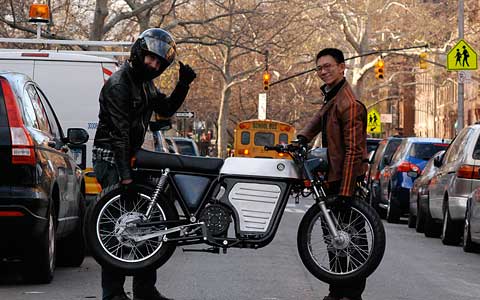 Batteries & Charging Technology
Building Better Batteries for Electric Cars  A solid overview of the topic that ran in the New York Times back on 3/30.  Interesting observation from Alex Molinaroli of Johnson Controls (which builds li-ion batts for BMW, Daimler, & Ford): he explains that since we don't yet have years' worth of road-test data from primarily electric cars, manufacturers are currently "overbuilding" their batteries, adding in materials and safety features to ensure they meet the demands of the drive-train warranty.  He claims something like 50% of the material used in current battery packs is "overcompensation."
Ford Uses Liquid Heating In Focus Electric To Give Batteries The Edge In Cold Weather  My favorite part of this article from Electronic Design is when Sherif Marakby, Ford's director of Electrification Programs and Engineering, points out that batteries are just like people: “they both achieve maximum performance working under moderate, unchanged temperatures."  Now that's a fact!  Mr. Marakby seems like a sensible guy, based on that observation and on the fact that Ford has a very intelligent and forward-thinking electrification plan in place.  They've started with the Ford Focus EV, which they're building on the same assembly lines as the regular gas Focus so that they can ramp up production to meet demands.  They have also committed to electrifying 5 more models in the Ford fleet over the next two years.  Go Ford go, sorry I was kinda trashing you for being mealy-mouthed in the last EV News Roundup.
Pennsylvania Firm Develops Wireless Electric Car Charging Mat  Industry Week reports on a start-up down in Malvern, PA (in Chester County) which is developing an innovative charging system for vehicles -- and will be testing it in a pilot program out in California this summer featuring a 100% electric airport shuttle bus.  Big shout-out to Andy Daga of Momentum Dynamics and to Enterprise Rent-a-Car for enabling this excellent combo of test, outreach & education.
Novel Nanowires Boost Fuel Cell Efficiency  Science Daily reports on a group of Yale scientists who have significantly improved the efficiency & durability of fuel cells by developing a new catalyst system.


Japan dumps thousands of tons of radioactive water into sea

Penguin rescue operation under way after south Atlantic oil spill
Gulf oil rig owner apologizes for calling 2010 'best year' ever   2010 was such a great year in safety over at Transocean that their top executive earned a $200,000 annual raise plus a bonus of nearly $375,000 last week, shortly before the 1-year anniversary of one of their rigs exploding, killing 11 people and leaking record quantities of oil for the next 3 months.   When their corporate explanation for Giant Bonuses After Giant Bungles started getting reported all over the place on sites like CNN, Transocean issued a press release noting that referring to 2010 as its best safety year ever "may have been insensitive."  Wow, that's some deep soul-searching self-scrutiny there guys, keep it up.
BP Seeks Permission to Resume Offshore Oil Drilling in the Gulf of Mexico

On the Technological Horizon for Renewable Energy
River Water and Salty Ocean Water Used to Generate Electricity  Electrolyte-exchanging technology invented by researchers at Stanford could mean power plants at river mouths -- giant batteries fueled by nothing more than the salinity difference between fresh & saltwater.  That is pretty cool folks.

Heard This Before Department
Obama rolls out plan to cut oil imports  The U.S. "will keep on being a victim to shifts in the oil market until we get serious about a long-term policy for secure, affordable energy," said the President last week, and if you have not seen the brilliantly well-crafted routine below demonstrating exactly how long THAT mantra has been around then please watch.  It is funny but it also hurts!  Thank you to mini-E driver and passionate EV promoter Tom Moloughney for posting this to your fantastic blog right after it aired.  I sent it around to everyone I know but somehow forgot to share it here, I don't know, sometimes that happens.
The Daily Show
Next up this week (before the next installment of EV news -- yes, this is actually last week's roundup whoops sometimes that happens): I visited the New England Electric Automobile Association this weekend and unsurprisingly had a really great time talking to a bunch of cool EV people and ogling on their cars.  Write-up & photos to come!
Posted by jisaacs at 11:29 PM