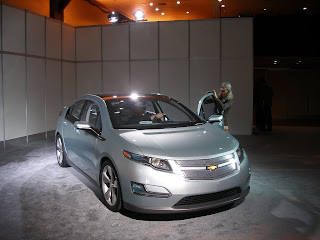 Recognize this?  It's one of the original concept renderings for the Chevy Volt.  I downloaded it onto my current hard drive back in 2007.

Today, I was on board a bus to Manhattan before the sun was up, en route to a special promotional event put on by GM. Who would have thought I'd end up photographing a real live Chevy Volt -- that's me under the lights with one! -- and then taking a test-drive?! 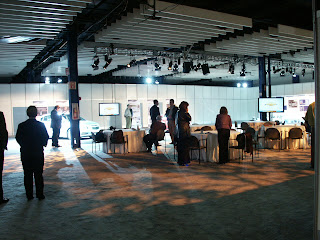 This was the scene at Pier 92 as the drivers assembled for this invitation-only opportunity.  The guest-list seemed to feature a mix of media representatives, ardent members of the Volt-age e-mail list, and a number of EV enthusiasts; GM had issued invitations to various Electric Auto Association chapters. 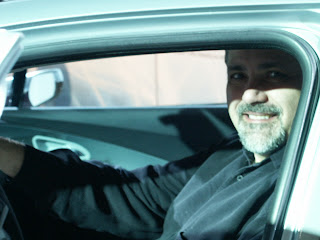 I met the founder of the Long Island EAA chapter, Michael Anzalone, whose regular ride is a factory-built electric Chevy S-10 made in the 90's for the California market.  He says most of the Chevy folks he 's talked to don't even know that there was such a thing! He and LI-EAA President Carl Vogel were in attendance, as well as three representatives from the Morristown, NJ EAA chapter, through whom I received my invite. 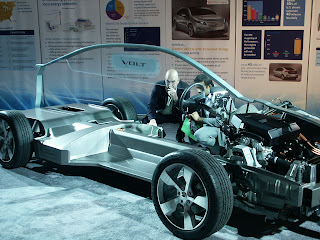 Here's a dandy cutaway model showing the central battery "spine" running up the middle of the vehicle from the motor/engine compartment and terminating in the crossbar.  The 200 lithium-ion cells in the Volt weigh about 400 lbs, so placing them here ensures balance in handling.  You can see Doug Stansfield, NJEAA president, scrutinizing the set-up. 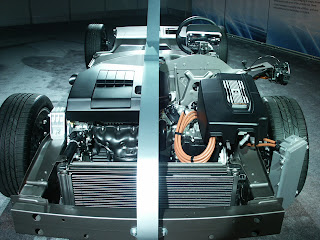 Front view of the cut-away (note the orange cable, denoting high-voltage wiring for first responders).  Some significant changes have been made to the final production vehicle, including switching the charging port, which hovers behind and above the tire on the right in this photo, over to the passenger side. 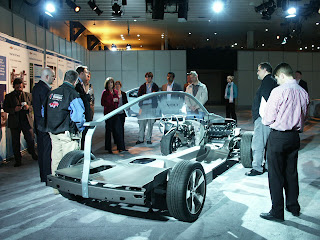 After a brief slideshow emphasizing how Chevy is going for "gas-friendly and gas-free" cars, Volt Product Manager Cristi Landy gathered us around the indoor models to talk a little about the development process, which she reports is on track for an end-of-the-year release.  If you, like me, believe that EV production can stimulate the US economy and create domestic manufacturing growth, you'll be pleased to hear that the batteries are being assembled in Southeastern Michigan and delivered to the Detroit-Hamtramck assembly line, where further testing models of the Volt are already being built. In this phase of development, they will stage a couple of iterations of builds in increasing quantities as they refine the performance.  At this point, it's largely software-tweaking. 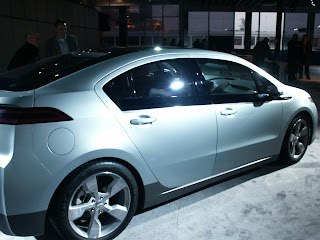 Cristi emphasized their long quest to get every aspect of it as aerodynamic as possible, with the very low airdam, closed grille and even the mirrors and spoiler all designed to maximize electric range (which is also enhanced by low-rolling-resistance tires).

I liked the vaguely retro original design, but oh well.  The Volt coming into production one looks like a "normal" car, which was perhaps the point.  This car is all about keeping US car-buyers within their comfort zones: thus the obsession with mitigating range anxiety.  But "gas-free"?  Come on, GM!

Below are the informative displays that were up for us to browse through as we waited for the real action to start.  You don't have to read them all (though I think they all click up mostly legibly for those of you, like me, with an inexhaustible appetite for this stuff) but I do want to draw everyone's attention to the last one.  In addition to "gas-free" the Volt is being billed in print as "not a hybrid, not a plug-in hybrid, but an EV with extended range." 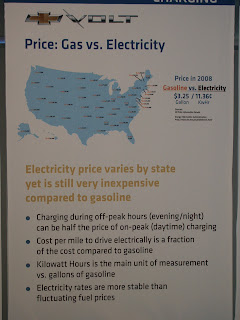 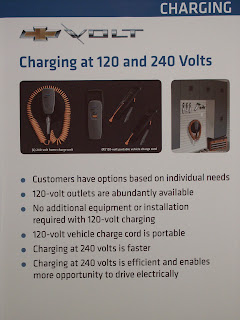 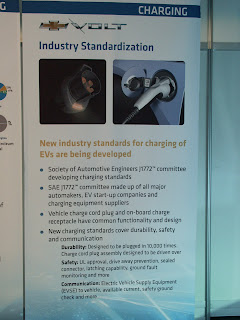 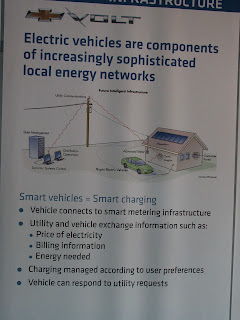 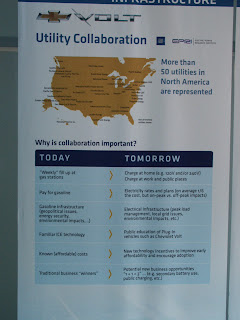 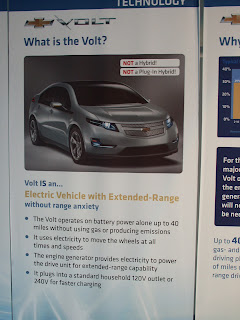 An EV is an electric vehicle, plain and simple. Runs on batteries, plugs into the wall at night.

A hybrid combines two (or more) power sources in the drivetrain. Any vehicle possessing both an electric motor and an internal combustion engine is a hybrid -- not an EV.

I have no idea why GM has decided to muddy the waters here, as I was too bashful to bring it up with my  gracious corporate hosts. But I must point out that there is already an established lingo for distinguishing between types of hybrids:

A parallel hybrid is a vehicle where both the internal combustion engine and the electric motor are harnessed to the drive wheels.

A series hybrid is a vehicle like the Volt, where the internal combustion engine powers an electric generator, which then maintains battery charge so that the electric motor can continue to turn the drive wheels.

I don't buy that the Chevy Volt is an "EV with a range extender." But I definitely think it is the finest plug-in series hybrid I've ever had the chance to tool around a track in! 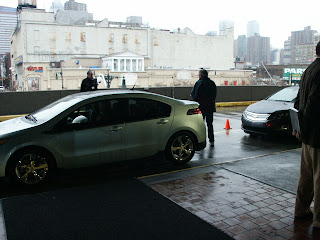 Okay, it's the only series plug-in hybrid I've ever tooled around in. Above is a bad shot of the two Volts GM was providing for the eager test-drivers -- one silver, one black. We rode in groups of 3, with a product engineer in the passenger seat to give tips and answer questions. After each lap of the course we'd do a Chinese firedrill and the next person would get to take the wheel. 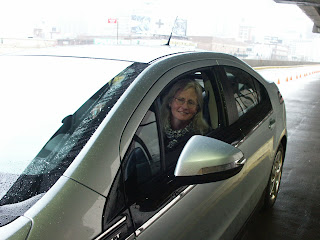 Last summer I got to drive a mini-E, and now look at me grinning behind the wheel of a second production EV.  I'm thinking, "So this is why I started Bucks County Renewables!"

And how did the Volt drive?  Starts with a push-button.  Feels like a normal car, only quieter (no eerie controller whine on start-up).  Traveling up the ramp, we got to hear the on-board ICE generator kick in; our product engineer/guide Trent confessed that they hadn't had time to charge the vehicles before we all piled into them, and the 3 drivers before us had played around with "performance mode" enough to drain the batteries down sufficiently to require charging-while-traveling. Actually, Trent had to draw our attention to the sound when the on-board generator kicked in; you can barely hear it.  The interior display was pretty snazzy (sorry, no photo, I was too mesmerized).

I rode with Chris and Bill, both Volt-age e-mail list subscribers, and they were crazy knowledgeable about the vehicle.  Chris tested out the L "gear", which sets heavy regen and is perfect, our man Trent told us, for coming down a windy mountain road.  Chris also asked about the problem of storing unused gas long-term in the tank, and we learned that unlike any present-day vehicles (which still emit some gas vapors even when they're turned off!) the Volt tank will be basically pressure-sealed.

As to handling, of course it was nimble compared to my Highlander Hybrid, but all these thickly-electronic modern drive systems feel kind of cushiony and distant to me.  My mighty driver pal Jesse of www.cleanmpg.com scoffed when I told him I'd be taking this run on a closed course.  I said I didn't want to go screaming around a track at 100 miles an hour, thank you very much -- but I didn't expect that the course would be so tight (up a curvy ramp and through some wiggly cones) that I felt a bit hesitant even to take the car up to more than a staid speed!  So I didn't get much of a chance to feel its real power. Maybe someday ... 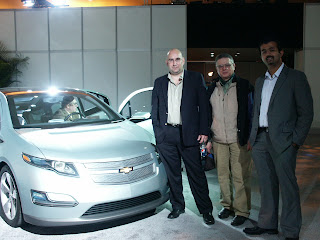 After the test drive we were allowed to loiter at Pier 92 for a while, where I snapped this shot of Doug with fellow NJEAA members Peter Crisitello (who currently owns a number of rescued Citi-cars and Comuta-vans and wants to sell some, email info at buckscountyrenewables.com to get in touch with him) and Sai Sankar, who has been building research EV's and hybrids at Fairleigh Dickinson under a federal contract.

When nice GM handler Carolyn found out I was just planning to hang around in the city till my bus left at 1, she offered me a free shuttle lift to the nearest coffee shop -- guess they are trying to butter up the bloggers!  Doug, Sai and I accepted a ride to the Port Authority in the rain and arrived there rather circuitously, but dry.

There was no need for extra-sweet treatment from the event organizers to garner a rave review from me, though.  This was a great opportunity to glimpse the future.  The Volt is an important car.  I'm excited about it -- and about all the production EV's in the pipeline for US consumers.  I can't wait to have a chance to drive the Leaf (hint, hint).

this sound like anti advertising all over again. $5 says the volt is only around for a couple years because Chev advertises all its limitations in the worst way. eg. " the new chevy Volt, its range is 40 miles"
I'll give you another $5 if they actually let people BUY them and not lease like they did with the EV1.
Thats why i am building my own Ev.