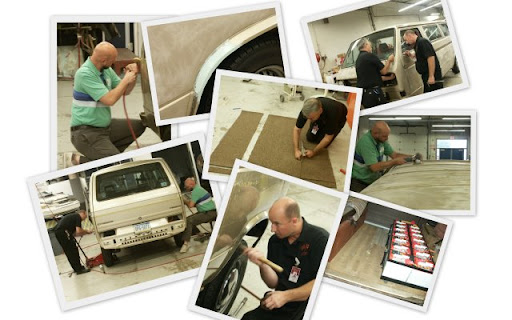 Away back when during the workshop in June I pledged a post to be called "Hitches and Glitches." Well, the time has obviously come. First, though, check out the collage above showing that the e-Van did indeed begin the paint-prepping process on Friday! I drove my friend Ramon up from New Jersey to help out Bob of NMTCC with the paint prep, and while they ground and sanded and did minor body work, Bill and I busied ourselves cutting out new carpet and even covering those terrible seats!

Alas, due to a number of scheduling and access difficulties at North Montco this month, things began to happen too late to manage prepping, painting, and fabricating battery box enclosures before the Energy Fest. Up until today I was holding on to a wisp of hope that we might get a partially-assembled e-Van up to Kempton -- but I'm afraid it's gonna be a no go in 2009.

Of course I'll still be offering both an overview and an in-depth look at the EV conversion process (the basic version on Friday morning and the longer one on Saturday afternoon in the Transportation Tent -- see the Friday and Saturday schedules for exact times, plus take a look at the amazing array of other offerings at the Fest!). Since in addition to making these presentations I also need to be spending time up at the Bucks County Renewables exhibit table it's just as well that I won't be tempted to stand by the van outside the tent happily spieling to passers-by -- but 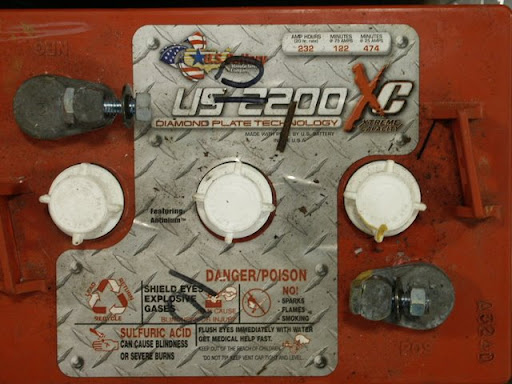 To start with, we originally decided we were going to order the exact same batteries (US 2200's). One key reason for this was so we could re-use all the cabling exactly as it was. Unfortunately, it turned out when we actually received the batteries that in the intervening two years the manufacturer had changed the style of the battery-posts. The old ones were "L-style" as below. 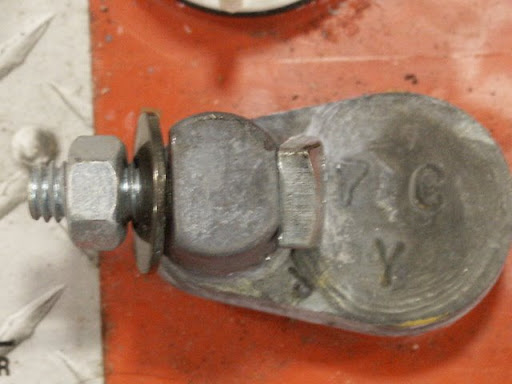 The new battery posts are vertical. 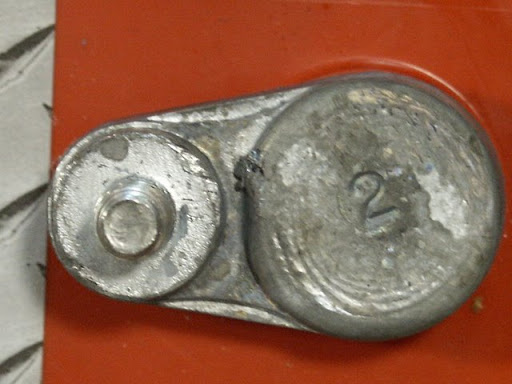 This changed the length required to make a neat and efficient linkage between terminals -- and meant we had to cut and recrimp all the old cable instead of being able to reuse it! 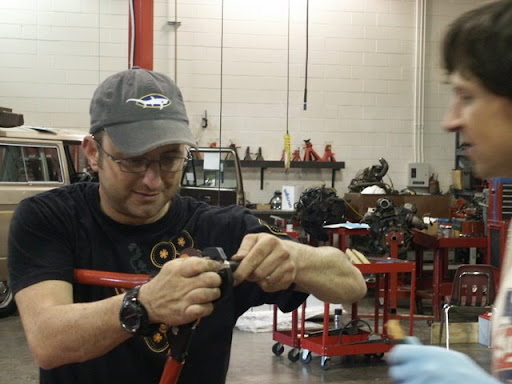 That was infuriating enough, but if I'd realized that we were going to have to do that anyway (plus reconfigure the battery racks themselves -- which we had originally decided just to leave as is, but then couldn't resist dinking with), well, I might well have budgeted for sealed batteries, just as Anonymous from Dracut, MA recently suggested here.

I might have expected the battery distributor that sold me the batteries in 2007 and again in 2009 to have alerted me to the fact that despite having the same name these batteries weren't the exact same configuration, but -- as we pointed out to the workshop participants -- that just goes to show the advantages of working with an EV conversion specialist who is aware of your purposes and would be alert to the technical problems posed by the different battery terminal shapes!

But really the moral of both June's mad scramble to recover from the wrong-shape-terminal surprise and last week's mad scramble to design and construct battery enclosures so that they can vent air safely while charging and be protected from curious fingers or dropped items while the vehicle is displayed ... that moral would be, Leave More Time to Get Things Done and you will be able to circumvent the hitches and glitches gracefully. Otherwise, they can take you right under and throw you off deadline.