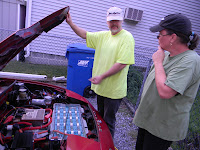 So this weekend was the Miata's first long-distance road test.  Since Kempton is approximately 50 miles away, at the absolute maximum of our calculated range, we were nervous about doing the entire trip in one shot.  We opted to play it safe, and staged the car overnight with friends, who were happy to share a buck and a half's worth of their electricity in addition to beers & dinner!  Of course they also had to check the car out ... that's okay, Matt loves to talk about the Miata as much as I do! 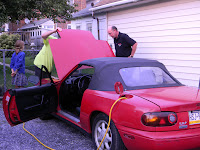 Our numbers on battery discharge & amp hours consumed on the two 30-mile legs on the way to Kempton were so encouraging that Matt decided to drive it directly home to Ottsville on Sunday.  He found a route that was only 46 miles, including almost 15 miles on I-78 (he went no faster than the legal 55 since he was maximizing range).  The odometer read 45.8 miles when he arrived, with 27.9% remaining on the batteries -- well within the recommended discharge limit!*
*Despite the formulas we were looking at on the last day of class which indicated that depth-of-discharge was not an issue with lithium-ion batteries, we have learned that in fact they do appreciate being drained no more than 80%.  (I understand, however, that they are are more tolerant of the occasional max-out than lead-acid batteries are.)
On the basis of this real-world range test, we can calculate that our Miata has a projected range of 63 miles.  80% of 63 miles of total range yields an effective daily range of just over 50 miles, which was Brandon's original projected performance for the vehicle and far exceeds our actual requirement of a 30-mile commute. I can't tell you how thrilled I am (already wrote to all our workshop participants to share the great news with them directly)!  Since almost a quarter of this drive took place @ 55 mph and the terrain featured quite a few Appalachian foothills, I am sure we are going to be able to rack up an impressive # of laps on Penn State's test track at the 21st Century Automotive Challenge next May.  Can't wait to get out there and get some really solid data on our efficiency & range. 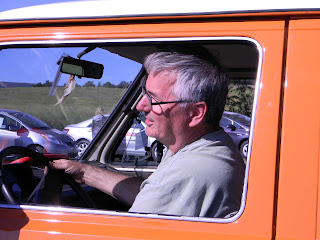 Confirming the Miata's status as a true 50-mile EV was the icing on the cake of a fantastic weekend.  Bill & I had a wonderful time at the Energy Fest.   I gave 3 well-attended History & Advantages lectures and as usual our 3-hour conversion overview was made available to Fest attenders for a fee of $15.   The highlight of that workshop, of course, is our incredible panel of real-world EV drivers and builders who come to share their experiences & knowledge of the topic.  BCR contributes half the proceeds of this workshop to the Eastern Electric Vehicle Club and this year we were able to make a donation of $75 (Ollie, I owe you $15). 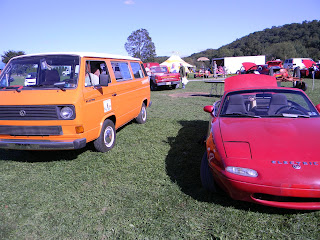 Displaying the Miata and the e-Van (as well as Bill's go-kart) side-by-side was just tremendous fun.  I spent hours talking to folks and answering questions about the cars.
We proudly drove our 2 vehicles in the new EV parade & mainstage review that was held all 3 days of the Festival.  And of course, we loved catching up with our friends in the Transportation Tent area,  the visitors & vendors & volunteers who return year after year to the Fest, and meeting lots of great new people as well (including the Sustainable Living Roadshow who are a completely awesome crew of human beings)

We were particularly delighted to get to see some workshop alumni: Ralph Opitz, Jack Waitz & his wife Caroline and Dan Gallagher & his family all came by to share/admire/fondle the Miata they built this summer.  Lynn McConville from the 2007 & 2009 workshops also came by to catch up; she was on the way to give her own presentation this year on Power Up Gambia, the solar power project for healthcare facilities that she has been working for.  It was wonderful to see Ralph, Jack, Dan & Lynn again as well as Rich Vasko from the fall mini-workshop at Green Jobs Academy and many familiar faces from the Macungie EV-ents of the last 3 years.  Apparently electric cars help build community, instead of isolating us from our neighbors and friends ... think that thought deserves a longer post some other time! 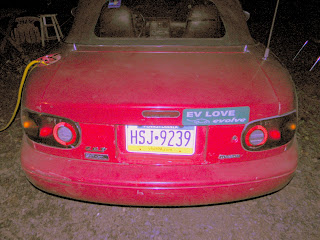 In the meantime, here's a pic of our dusty little champ charging up again at home after her 46 mile haul from Kempton.
Posted by jisaacs at 11:20 AM